FBR’s collection nets growth in revenues by 36.5% mainly due to increased imports 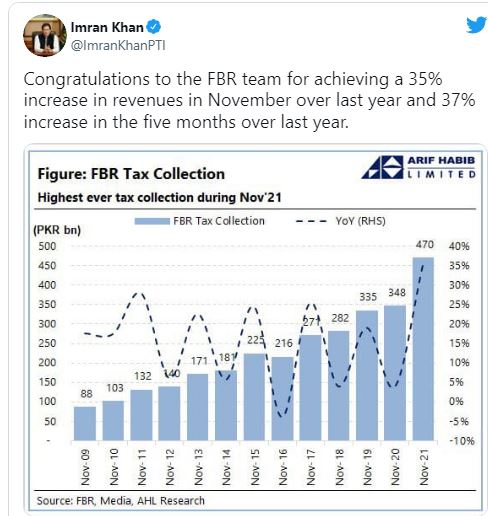 According to details, the FBR has exceeded its sought target by Rs298 billion in the first five months (July-Nov) period of the current fiscal year. It collected Rs2.314 trillion against the desired target of Rs2.016 trillion.

The FBR’s collection has netted a growth in revenues by 36.5% mainly because of increased imports.

Official sources confirmed to The News that the contribution in revenues at the import stage was more than 52% in the overall tax collection in the first five months of the current fiscal year.
Although the FBR did not release official figures in detail but the initial assessment of the scoreboard showed that the revenue collection went up mainly because of the surge in imports and secondly massive depreciation of the rupee against the dollar. These two factors helped the FBR to surpass its collection with a huge margin.

There is a need to analyze collection on front of income tax with efforts to generate tax demand and then actual collection out of the total demand and second, General Sales Tax (GST) collection on domestic front. These two heads demonstrate level of economic activities and efforts put up by the tax machinery to collect taxes after putting in place their own efforts on the ground.

When contacted, the FBR higher-ups replied that the provisional figures of revenue collection were available and the FBR had shared its initial collection figures. They showed the confidence that the FBR collection would further go up when the figures would be finalised in the next few days.

According to the official press statement issued by the FBR on Tuesday night, “The Board has released the provisional revenue collection figures for the months July-November of current Financial Year 2021-22. The FBR has collected net revenue of Rs2,314 billion during July-November of current Financial Year 2021-22, which has exceeded the target of Rs2,016 billion by Rs298 billion. This represents a growth of about 36.5pc over the collection of Rs1,695 billion during the same period last year.

“While chasing the target of Rs408 billion fixed for the month, the net collection for the month of November, 2021 realized Rs470 billion (Rs62 billion in excess of assigned monthly target), representing an increase of 35.2pc over Rs348 billion collected in November 2020. These figures would further improve before the close of the day and after book adjustments have been taken into account.

“It is pertinent to mention that after collecting over Rs4.7 trillion and exceeding its assigned revenue targets set for tax year 2020-21, the FBR has successfully maintained the momentum set in July, 2021. Its tax collection posted historic high growth in first quarter of current fiscal year. During first four months (July-October), the FBR has far surpassed its revenue target by Rs233 billion.